A peak in global emissions from energy generation is predicted for 20201, so the search for cost-effective and efficient means of generating energy via renewable sources is on. Between 2012 and 2013, there was a 20% increase in electricity generation from solar power in the European Union2, signifying a substantial growth in the investigation and application of solar technology. 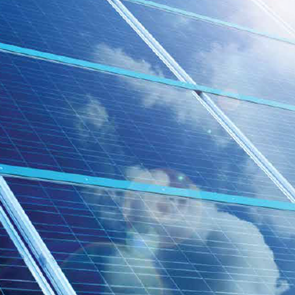 Solar cells (or photovoltaic cells) are devices that convert light energy into electricity by absorbing photons into a semi-conducting material. There are many different types of solar cells, but at the forefront of this technology are perovskite cells. Perovskite cells have high efficiencies and low production costs, and as such are the fastest-advancing solar technology to date.

A team of scientists sought to study how processing conditions affect the crystal structure and efficiency of the perovskite cells. The team focused on comparing atmospheric conditions during a procedure called annealing, which involved heat and vapour treatment. A crystallographic technique known as in situ wideangle X-ray scattering (WAXS) performed at Diamond’s Small Angle Scattering & Diffraction beamline (I22), enabled the formation of the perovskite cells to be studied in real-time when annealed in differing atmospheres. It was discovered that cells annealed in air had a higher quality crystal structure and electrical efficiency than those annealed in nitrogen. This result is of great importance as it not only identifies a means of increasing efficiency, it also demonstrates a clear correlation between the structural and electrical properties of the cells, which is paramount for their future commercial development.

The high efficiency of the perovskite cells can be attributed to their highly crystalline framework which has a very precise and symmetrical structure. However, despite many advances being made in the electrical performance of the cells, the interplay between their efficiency and crystal structure was unknown. This link was explored through the application of the synchrotron.

Scientists from the University of Cambridge, the University of Oxford, and the Adolphe Merkle Institute in Switzerland investigated the influence of different atmospheres (air versus nitrogen) on the annealing of perovskite films deposited from a mixed halide precursor. The samples consisted of powder obtained from spincoated films, and the WAXS on I22 was performed while annealing at 100 °C for 2.5 hours. A wide q-range was employed to map out the structural features that appeared during annealing. Dr Alessandro Sepe, group leader of the synchrotron studies at the University of Cambridge, who led the synchrotron study team explained: "the WAXS technique allowed us to see the crystal properties of the photovoltaic cell in real-time at a very high resolution. We knew what we wanted to observe, but we were unsure what we could expect to see, so we had to adapt the parameters of the experiment as we gathered the results."

Fig.1: 2D in situ WAXS maps showing the kinetics of the crystal structure of bulk perovskite monitored in real-time while annealing the material at 100 °C for 2.5 h in air (a) and nitrogen (b). The 2D reconstructions illustrate defined reflections that confirm retention of the perovskite crystallinity upon annealing, which explains the increase in performance of the final devices. Reprinted (adapted) with permission from Pathak et al. ACS Nano. 9, 2311–20 (2015).

The application of the I22 beamline enabled the team to correlate the electrical properties of the photovoltaic cells with their structural properties. Overall, they discovered that annealing in air led to the development of larger crystals with a higher quality structure than those annealed in the presence of nitrogen. Importantly, this improved structure led to increased electrical performance, with samples annealed in air having an efficiency dramatically higher than those annealed in nitrogen. Scanning electron microscopy confirmed the structural findings and revealed that annealing in air led to slower crystallisation with fewer numbers of nucleation centres than in nitrogen.

These results demonstrate that processing conditions can influence the crystal structure and pave the way to further improve the efficiency of these solar devices. Dr Sepe concluded: "The synchrotron studies have allowed us to discover how the crystal properties, and the corresponding kinetics, are related to the efficiency of the cells. We have found a way to increase their efficiency and we can now tune what is happening in this system."

The team hopes to extend the study to pinpoint which processing conditions increase the stability of the cells. A greater range of annealing temperatures and different atmospheric gases will be explored, which will further advance the development of these pioneering solar cells.

To find out more about using the I22 beamline, or to discuss potential applications, please contact Principal Beamline Scientist Dr Nick Terrill: nick.terrill@diamond.ac.uk