Find out more about our latest collaborations with industrial partnersRead More.

Recreating the stresses experienced by steel during manufacturing processes.

The automotive industry typically uses steel sheets for the bodywork of cars. The steel is cut to the size of the part (i.e. roof, door or bonnet) and then stamped into the precise shape required. Although steel is a commonly-used material, the exact behaviour of the metal’s crystalline structure during these forming processes has yet to be fully mapped. 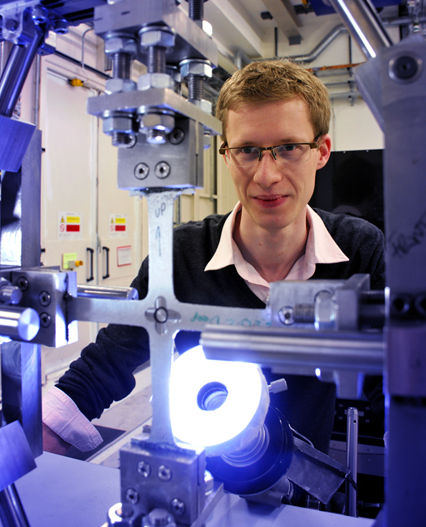 A study using X-ray diffraction at the Joint Engineering, Environment, and Processing (JEEP) beamline, I12, was carried out to observe how the steel’s crystalline grains – the groups of crystalline lattices that make up the metal structure – respond to deformation. The pioneering work was a collaborative effort between academia and BMW-MINI, so that the results could be fed back directly to the car manufacturer. By understanding how these ‘steel crystals’ react when undergoing stamping, new alloys could be created that offer greater flexibility and strength which might allow more complex shapes to be formed.

The team of scientists designed a bespoke rig in order to recreate the stresses exerted on sheet steel during car manufacturing. X-ray diffraction allowed the team to track the metal at a high angular resolution as it was deformed using the rig, and these observations were shown to closely match theoretical computer simulations of the stamping process. This is the first time that a sheet metal has been deformed in this way during X-ray diffraction, and this technique could be applied to monitor the behaviour of many other materials undergoing stress.

The stresses exerted on sheet metal during stamping are difficult to study. The metal is typically deformed along two axes (termed ‘biaxial’), but previous efforts by material scientists have only studied stress along a single axis. The various strains and stresses exerted on a material as it undergoes deformation are known collectively as a strain path; consequently, replicating a strain path is vital in order to accurately recreate the events in a factory.

A team of scientists from the University of Oxford, The University of Sheffield, and Diamond Light Source designed and constructed a cruciform rig to support a section of sheet steel provided by BMW-MINI. The cross-shaped structure enabled the scientists to pull the metal at the four ‘arms’ to recreate the biaxial strain path experienced by sheet steel in a car factory. The cross was cleverly aligned with its centre directly in the path of beamline I12 so that X-ray diffraction could be used to study the steel crystals during deformation (Fig. 1). 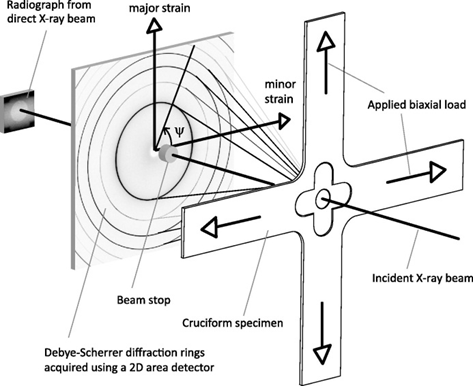 Fig. 1: Experimental setup at the I12 beamline at Diamond, showing the incident X-ray beam striking the cruciform sample which is subjected to biaxial loading. Diffraction data and radiographic images of the gauge volume were acquired with a 2D area detector and imaging detector respectively. For the latter, the beam stop and area detector were temporarily displaced to permit X-ray collection without obstruction.

What progress was made? The X-ray diffraction studies at Diamond allowed the team to accurately visualise the effect of biaxial stresses on sheet steel. Prior to the synchrotron study, the scientists generated computer models of steel crystals during the forming process. These theoretical observations were successfully validated by the results at Diamond. Dr David Collins (pictured) from the University of Oxford explained "the studies allowed us to link our simulation with the crystals observed at Diamond and prove that our setup could recreate the strain path".

The team saw that the biaxial strain ratio (the ratio between the ‘pulling’ directions in the cruciform rig) affected the distribution of strain across the crystal lattice. This lattice strain accumulated more rapidly in the direction of the axis that was exerting the greatest load, but the distribution became uniform at high loads (Fig. 2). 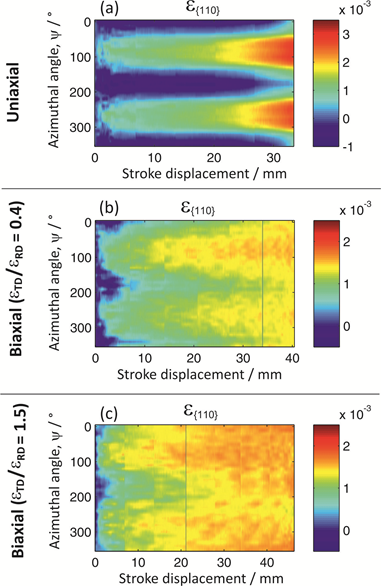 Much of the work focused on the design of the novel rig, which could also be applied to study other materials undergoing biaxial stresses. Dr Collins concluded: "We hope to look at more complicated materials such as titanium-based alloys, which are of interest to aerospace manufacturers. In fact, any material that can be stamped or formed could be observed using this setup."

To find out more about using the I12 beamline, or to discuss potential applications, please contact Principal Beamline Scientist Dr Michael Drakopoulos: michael.drakopoulos@diamond.ac.uk