Tightening the grip on HIV

HIV is a lifelong disease that can progress to AIDs as the immune system deteriorates. Incredibly, there is a small section of the population in which progression is stalled and this resistance is believed to be down to genetic differences in how the immune system behaves upon HIV infection.

The key elements to this story are human leukocyte antigens (HLAs), proteins present on every nucleated cell in the body, and certain white blood cells, called T cells. When white blood cells are infected by HIV, they can show portions of the virus on their surface via the actions of HLAs. The surrounding T cells then recognise the exposed HIV fragments held by the HLAs and an immune response is mounted to help destroy the infected cell. In a susceptible individual, the HLAs hold the virus sections in such a way that the T cells cannot recognise them, meaning that the virus escapes detection by the immune system.

A study was conducted to observe in 3D how HIV fragments bind to different HLAs, and to explore how they relate to disease resistance. This work was made possible by using high-resolution X-ray crystallography at beamline I04-1 at Diamond. It was found that the strength of the bond between the HLAs and the HIV fragment varied, and furthermore, identical HIV fragments were held in different orientations by the different HLAs. It is these differences that determine whether the T cells are able to recognise the fragments.

There are two main types of T cells: cytotoxic T cells (also known as CD8 cells), which are capable of directly killing infected cells, and helper T cells (also known as CD4 cells) which help regulate the immune system. When HIV infects a CD4 cell, some of the viral proteins are presented on its surface by the HLAs to encourage nearby CD8 cells to kill it. The interactions between the HIV fragment (bound by HLA) and CD8 cells have never been studied at an atomic level, and it is thought they may yield some clues as to why some people have natural HIV resistance.

Scientists from University of KwaZulu-Natal (SA), Cardiff University (UK), Microsoft Research (USA), University of Copenhagen (DK) and University of Oxford (UK) set out to investigate how four known HLAs – some associated with resistance and some with susceptibility – interacted with HIV protein fragments. The team initially used circular dichroism (CD) to assess how tight the interactions were, and then prepared crystals of the HLA molecules bound to the HIV fragments to perform X-ray crystallography at Diamond. 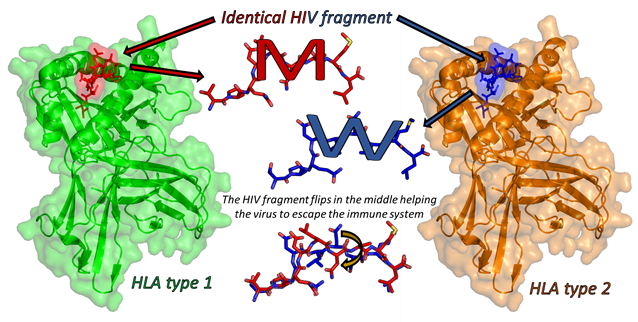 The study revealed that people with a natural resistance to HIV appear to have HLAs that bind onto the viral proteins more tightly than those who are susceptible. The conclusion is that a tighter bond allows the infected cell more time to be recognised by a CD8 cell, so that it is killed before the HIV infection spreads. In contrast, looser bonds mean fewer interactions with CD8 cells, thereby allowing the disease to progress.

The synchrotron studies also showed that the four different HLAs presented the same fragment of HIV protein in different orientations. The HLAs possess certain anchor points that hold the HIV-fragment in place, and these anchor points vary between individuals (Fig. 1). Dr David Cole from the University of Cardiff explained: "The HIV fragment was presented in a ‘W’ or ‘M’ arrangement and this acted as a conformational switch that affected the ability of the CD8 cells to latch on and kill the infected cell. This tells us how HIV escapes from the immune system and could allow us to tailor treatment choices in HIV patients."

The team hopes to extend the study by making crystals of the ‘W’ and ‘M’ shaped fragments bound to the molecule on the T cell responsible for recognising antigens: the T cell receptor (TCR). According to Dr Cole, "By exploring the interactions with the TCR we could see which shape escapes detection by the T cells, and potentially design peptides as vaccines to activate the T cells."