The evolution of an active catalyst

The majority of commercially produced materials and chemicals are made using manufacturing processes that utilise catalysts, which help to prompt and speed up chemical reactions. Catalysts perform this function by reducing the activation energy of a reaction, which increases the reaction rate compared with uncatalysed reactions in identical conditions.

Catalysts are chosen based on the reaction they enhance and they can be made of a wide range of materials. One such catalyst, gold-palladium (AuPd) formulated as nanoparticles, is used widely in different catalytic applications, including the industrial production of vinyl acetate. Despite being well-studied, the composition and structure of these nanoparticles over the course of a reaction has not yet been tracked; therefore, efforts were undertaken at Diamond to shed some light on the behaviour of these bimetallic nanoparticles.

Two techniques were combined at Diamond’s Core XAFS beamline (B18): XAFS (X-ray Absorption Fine Structure), which in this instance provided information on the interior of the nanoparticles, and DRIFTS (Diffuse Reflectance Infrared Fourier Transform Spectroscopy) to observe the surface of the nanoparticles during a reaction. Together, they showed that the AuPd nanoparticles underwent significant changes during an oxidation reaction.

Initially, the nanoparticles have a surface consisting of a mixture of oxidic and metallic components, whereas the interior comprised of an Au core surrounded by a mixture of Au and Pd. At the end of the reaction the exterior of the particle restructured to solely metallic Pd and the interior of the particle remained mostly unchanged (Fig. 1). This approach demonstrated how the two techniques can be used to provide valuable insights into the composition of the nanoparticles directly under reaction conditions, which could be applied to many other types of catalysts.

Fig. 1: Schematic representation of (a) the fresh catalyst, (b) the cross-section of the fresh catalyst, (c) the final catalyst state after reaction, and (d) the crosssection of the final catalyst, where the red, blue, and yellow balls indicate O, Pd, and Au atoms, respectively. Reprinted with permission from Gibson et al. Chem Mater. 37, 3714–3720 (2015). ©2015 American Chemical Society.

The study was conducted by scientists from the UK Catalysis Hub, which is in the Research Complex at Harwell, adjacent to Diamond Light Source. Together with scientists from University College London, they designed a system to carry out two characterisation techniques simultaneously during carbon monoxide oxidation. 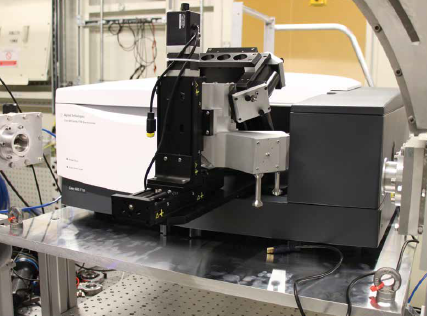 At beamline B18, XAFS was used to look at the composition of the interior of the nanoparticles and DRIFTS was used to characterise their surfaces. The team, along with Diamond scientists, developed a system that utilised a rapid scanning infrared spectrometer, a mechanical arm which extends the optical path of the spectrometer, and a bespoke sample environment which allowed both infrared and X-ray measurements to be performed simultaneously.

The team found that the AuPd nanoparticles underwent a significant amount of restructuring over the course of the oxidation reaction. Dr Peter Wells of the UK Catalysis Hub explained: "The study has allowed us to see what parts of the nanoparticles are actually doing the work during catalysis, and this information is of great importance in this field."

Whilst the AuPd catalyst is of huge interest as it could be used in many catalytic processes such as the upgrading of bio-derived chemicals to more valuable products, this combined setup could also be applied to many other types of catalysts. The wealth of information offered by such a technique under reaction conditions and in real time can help advance our understanding of how catalysts work.

In the future, the team plan to improve their methodology and they will use this novel approach with industrial collaborators to understand how the catalysts they make work under real conditions.

To find out more about using the B18 beamline, or to discuss potential applications, please contact Principal Beamline Scientist Dr Giannantonio Cibin: giannantonio.cibin@diamond.ac.uk