New sample-changing robot on I03

For more than 10 years, sample changing robots have been an essential tool for macromolecular crystallographers (MX) at synchrotron beamlines, allowing researchers to study 100's of samples per day. With the arrival of fast, pixel array detectors on all the MX beamlines at Diamond, the data collection times have reduced considerably and the number of samples being studied per eight hour shift has more than doubled in the past five years. Consequently there has been a drive to increase the capacity and efficiency of the sample changers. 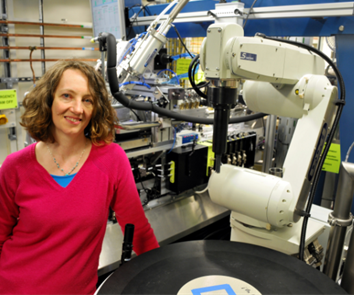 Dr Katherine McAuley, Principal Beamline Scientist for I03, with BART.

Since January, a new robotic sample changer has been operational on beamline I03. The new robot ‘BART’ has improved exchange times, increased sample capacity significantly and is more tightly integrated into the beamline control systems, which means reliability has also improved.

Once the samples have been loaded into the robot, the user interface to load and unload samples in the data acquisition software is unchanged so there has been a smooth transition for the users from the previous sample changer to BART. The larger sample capacity means that all samples can be loaded into the robot dewar at the start of the beamline session and the experiments do not need to be interrupted later in the day to change sample containers in the dewar.

The results from the first few months of BART’s operation are very encouraging. In Run 1 (16th January to 4th March 2015), more than 4,000 samples were loaded with BART and the average exchange time was 20.3 s. This is an 8 s improvement over the previous sample changer on I03. BART is still being optimised and the exchange time for Run 2 is currently 18.3 s.

The BART robot system was developed by the I03 beamline team with help from Diamond Controls engineers, Mechanical and Electrical engineers, the Data Acquisition team and the MX technicians. Work has started on the next stage of BART developments which will result in the sample changer being installed on beamlines I04, I04-1 and I24 by the end of 2016.

2. Interchangeable base-plate inside dewar that can hold 12 crystallisation plates for in situ data collections, or up to 23 unipucks (368 samples) for standard experiments with cryo-cooled samples.

4. Fast dryer for de-icing the robot gripper. Dry times are typically 25 s compared to 90 s for the previous robot.

5. Machine vision system with two cameras for detecting the location of dewar lids and reading sample barcodes as they are transferred to the goniometer.