In the centenary year of his death, we explore the life and achievements of the scientific prodigy killed in WW1, aged 27.

Henry Moseley is regarded as one of the world’s most important scientific heroes, but whose bright star burned far too briefly. At the age of 26 he solved one of chemistry’s greatest conundrums, determining what distinguishes elements from one another and developing a means of identifying elements based on their atomic characteristics. Moseley’s work revolutionised chemistry and spawned a vital and widely-used technique: spectroscopy. However his story is a tragic one. Moseley lost his life during fighting at Gallipoli in World War One; he was just 27. But despite his short career, Moseley left behind a rich legacy of scientific accomplishment and laid the ground for the evolution of modern chemistry.

Professor Justin Wark, keynote speaker at this year’s Synchrotron Radiation Users’ Meeting at Diamond, is Fellow in Physics at Trinity College, Oxford – the College where Moseley studied as an undergraduate. Justin comments: "What Moseley might have achieved had he not been killed by a sniper’s bullet in Gallipoli a century ago is impossible to tell. Many prominent scientists have speculated that he may well have gone on to win the Nobel Prize in 1916. Whatever the answer to that question, there is no doubt that within a few short months the insight he gave us into our world at the atomic level helped define and shape the modern view of how the physical universe operates." 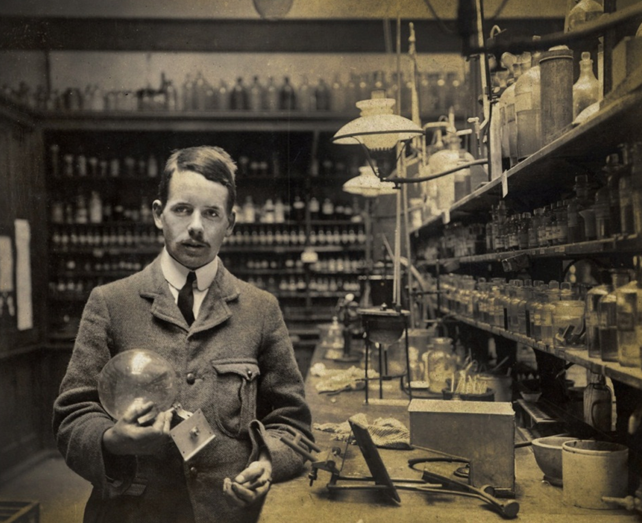 Moseley had only been out of university for three years when he struck upon a discovery that would change the field of chemistry forever. The year was 1913, and the father and son team of William Henry and Lawrence Bragg had just discovered the art of crystallography. Their experiments with X-ray diffraction had shown that it was possible to determine the atomic structure of a crystallised object based on the patterns it produced when exposed to X-rays.

Moseley was curious to find out whether X-rays could be used to uncover anything else about the atomic nature of matter. A young physicist with a flair for chemistry, he was particularly interested in the relationship between different elements. At that time, the periodic table had been in existence for some years, and the accepted thinking was that elements’ chemical properties were dependent on their atomic mass; what we now know as the total number of protons and neutrons inside the nucleus of the atoms. Thus the table was ordered according to atomic mass, starting with the lightest elements, through to the heaviest elements.

However, there were some clear problems with the system. Certain elements seemed to share a similar atomic mass and yet display different chemical properties. When they encountered this sort of quandary, chemists simply guessed as to the element’s location on the periodic table. No-one was entirely sure why two elements that appeared to be atomically identical should behave differently.

Moseley was intrigued by this mystery, and so he set about trying to work out what it was that truly distinguished elements from one another. He knew that their chemical properties must be somehow related to their atomic structure, but he wasn’t sure how. Moseley built on the Braggs’ research by directing a beam of electrons onto different elements to produce X-rays, and then using the angle at which they scattered from a particular crystal to determine the frequency of the X-rays that had been emitted.

He discovered that some elements released very high frequency X-rays whilst others emitted them at a much lower frequency. Moseley realised that the frequency had to depend on the level of charge deep inside the element’s atoms, meaning that each element had a different number of positive charges within its central nucleus.

Neutrons are also present inside the nucleus, but they carry no charge. This meant that it was the protons, not the atomic mass, that distinguished elements from one another, because it was the protons that provided the central charge, and the nucleus of each element was charged differently. Two elements could have close to the same atomic mass – i.e. the same total number of protons and neutrons – but one could contain a greater proportion of protons and thus a higher charge than another. And whilst two elements could have the same atomic mass, they could never have the same number of protons; that was what made them unique.

Moseley had hit upon something really important: the chemical properties of an element were dependent on the number of protons the atoms contained, not the atomic mass. Each element had its own number of protons, from 1 in hydrogen to 92 in uranium.

A new order to the periodic table

This accounted for all of the incongruities in the periodic table. The discovery led to a reordering of the table according to the number of protons each element’s atoms contained, and this became known as the 'atomic number'. Moseley was even able to identify gaps in the periodic table and predict the discovery of future elements, all of which were later found. His work had finally solved the mystery of what distinguishes the elements from one another, and the findings allowed chemistry to flourish.

What’s more, Moseley’s research had uncovered a new technique: spectroscopy. Scientists now had a way of identifying any element based on the wavelengths it emitted when exposed to X-rays. This technique continues to thrive today, and is used at synchrotrons like Diamond to study everything from dinosaur bones to cancer treatments.

The exceptional start to Moseley’s career came to a tragic end when he was killed in action during World War One. With the young physicist’s death, the country had lost one of the brightest minds of a generation. Indeed, such was the importance of the scientific work which Moseley accomplished in his four year career that the American biochemist Isaac Asimov described the young man’s death as "the most costly single death of the War to mankind generally." Although he has been gone for over a century, Moseley’s impact still resonates. His astonishing intellect and natural curiosity redefined our understanding of chemistry and left scientists with a powerful technique for investigating the elemental structure of matter. In just four short years, this young man changed the face of science, and as long as there are scientists using his techniques to study the composition of our world, Henry Moseley will never be forgotten.

You can watch Professor Wark’s talk on Moseley’s Law, delivered at Trinity College in 2014 on YouTube: http://bit.ly/TrinityMoseleyTalk

The excellent exhibition ‘Dear Harry...: Henry Moseley, a scientist lost to war’ is on at the Museum of the History of Science in Oxford until 18th October: http://www.mhs.ox.ac.uk/moseley

Image of Henry Moseley courtesy of Museum of the History of Science, University of Oxford.