Giving a voice to synchrotron science

Rosamund Herapath, Physics MSci student at Bath University, writes on the value of sharing our passions with the public.

On 11th July, Harwell campus threw its doors open to all. There were activities, tours, demonstrations, and displays set up in order to attract people into the world of science. The response was huge, with around 16,000 people passing through the campus in the space of 7 hours. Of course, this meant there were groups who’d travelled from far and wide to be there that day, but many were locals who had come to answer a particular question: What actually happens at Harwell?

This may seem like an innocuous question, except when you consider that many of these people have lived next door to one of the UK's largest scientific centres for decades. The Atomic Research Centre was founded in 1946 and the site has been in constant use since then. ISIS itself has been operational for over 30 years, and Diamond has been a local landmark since the external building was completed in 2005.

Many scientists still do not talk much about their research. They often try to sum up their work in a sentence if anyone asks, wary of going on too long. As Simone Sala, demonstrator for the day and PhD student supported by Diamond observed, "many scientists are not convinced about how much the public could be really excited about this kind of activity. There is a hesitancy amongst many to talk about their work for fear of boring the listeners, and a perception that the general public just simply won’t want to know."

And yet this perception is very much at odds with the crowds (16,000) that have flocked to Harwell, eager to learn. From my own engagement with the visitors, no one at the day seemed bored; all seemed happy while participating in activities, browsing the stalls or asking questions to the demonstrators. "It’s interesting to see how we find out about the things we know” commented Ashmita from Oxford, whose favourite stall was a demonstration about vacuum technology. "It was nice to see what was happening on the inside." The day successfully matched many people’s inquisitiveness concerning Diamond’s operations.

Mark Basham, whose Lego beamline brainchild proved so popular with the visitors, clearly relishes explaining his work with anyone who’ll listen: "Who doesn’t enjoy playing with Lego? And that goes for those with or without a science background. In fact, communicating to other scientists from different fields is very much like communicating with someone without much prior knowledge. It’s all about breaking things down, using simple language, and just making that connection with the individual". 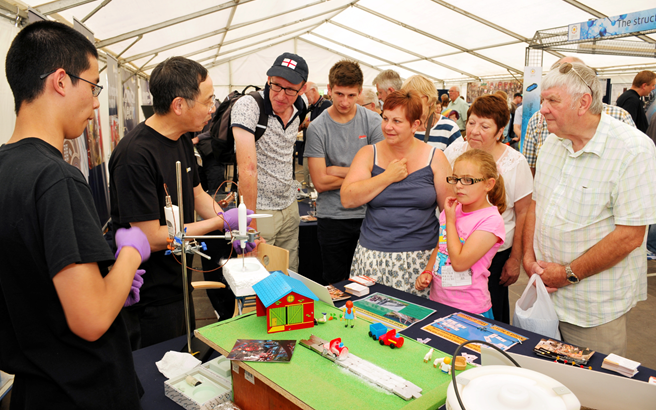 Professor Chiu Tang and his son Vincent talking with visitors to the Harwell Campus open day in July.

Thus, the responsibility of communicating research to these people is crucial. Considering the number of people at the open day who don’t realise how diverse science can be, even at Harwell alone, it is a shame that we may be missing others on the assumption that they aren’t interested.

As a physicist with a love for my subject, and a curiosity about many others besides, it is wonderful to see people getting enthused by the passion of those presenting the wonders of their subject. But it doesn’t have to be through large-scale science events that ideas and interests can be shared. It can just be a casual chat across the garden fence. "I ask my daughter [a science student] silly questions when they come into my head" said Lynette from Woking, who prefers to engage in science through conversations with her daughter.

Many of the visitors also identified that friendly, chatty demonstrators made them more enthusiastic. This doesn’t just apply to those who came already interested; this also appeals to those who have been dragged along behind a keen child, friend, or partner. This piqued interest is down to a mode of communication that a news story or blog post can’t quite reproduce; it stems from feeling the enthusiasm that emanates from those living and breathing the science every day – the scientists themselves.

Rosamund was invited to write for Diamond News as the winner of the science writer’s prize from last year’s student placement scheme.

Diamond regularly opens to the public, and on average welcomes to the Harwell Campus 6,000 visitors every year. www.diamond.ac.uk/Public/VisitUs