Raising the heat on superconductors

Researchers have used high-energy X-ray powder diffraction to investigate the fundamental science behind the transition of materials into high-temperature superconductors.

Superconductivity is where a material obtains zero electrical resistance as it is cooled below a certain transition temperature (Tc). Superconducting magnets are used to make some of the most powerful electromagnets, including in those used in MRI machines, as well as in Diamond’s own beam-steering magnets.

Superconducting wires used in most applications superconduct below 23 K and, in order to carry a sizeable electric current, require cooling to near absolute zero temperatures (~4 K / -269 °C) using liquid helium. The mechanism of superconductivity normally limits Tc to below 40 K. However there exist some so-called ‘high-temperature’ superconductors with Tcsof 40 K or above, including some where liquid nitrogen (77 K, -196 °C) may be used as the coolant. 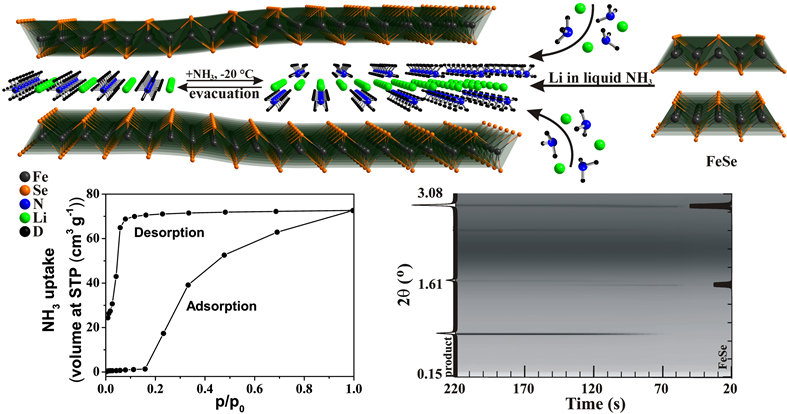 Intercalation of Li+ ions and ammonia / NH2- ions into FeSe and the equilibrium between the ammonia-poor and ammonia-rich phases which are both high temperature (Tc ~ 40 K) superconductors. The 2D film plot of powder XRD patterns conducted at I12 (bottom right) and the NH3 adsorption / desorption isotherms (bottom left) accompany the chemical reaction and the equilibrium, respectively.

As liquid nitrogen is a relatively simple coolant to handle and use, the development of effective high-temperature superconductors will increase their usability in a vast range of equipment.

The researchers from the Inorganic Chemistry Laboratory of the University of Oxford, Diamond Light Source, and the ISIS Facility, used the Joint Engineering, Environmental, and Processing (JEEP) beamline (I12) to investigate the chemical reactivity and properties of an iron-based superconductor. They developed a technique to investigate the chemical reaction where iron selenide (FeSe) more than quintuples its transition temperature, which involves a reaction with a solution of the metal lithium in liquid ammonia.

By pouring the FeSe into a solution of lithium in liquid ammonia at temperatures between -78 °C and room temperature, the researchers used time-resolved X-ray powder diffraction to investigate how intercalates (layers within the crystalline structure of FeSe) formed. This resulted in the discovery of new crystalline superconductors with Tcs of about 40 K containing large amounts of ammonia between the FeSe layers (see Figure).

Setting up the beamline to investigate the reaction proved to be one of the major challenges of the project. “Ammonia is a gas at room temperature, so cooling it to look at the reactions was tricky” explained Stefan Sedlmaier, of Oxford University. “Fortunately, we were able to work with the beamline scientists and the glassblower at Oxford Chemistry to create a special vessel in our labs, which could hold the liquid ammonia safely and allow us to pour in the FeSe powder to initiate the reaction while the solution was exposed to the intense, high-energy X-ray beam on I12.”

This did mean moving a large part of his lab to Diamond in order to load the reaction vessels. “Yes – this [moving the lab] was one of the most challenging elements of this project", continues Stefan Sedlmaier, "but thankfully we were able to take advantage of the lab space opposite the I12 beamline.”

"The I12 beamline allowed us to collect data very quickly”, concludes Stefan Sedlmaier, “which was vital as this reaction only occurs over the course of a few minutes at room temperature.” This fast pace was also mirrored in the speed of publication, with just six months between beamtime and the article being published in Journal of the American Chemical Society.

The rapid data collection methods at Diamond allow otherwise fleeting phases to be examined and characterised, with the results showing a promise of further molecular intercalates, whilst expanding the range of iron-based high-temperature superconductors.

To find out more about using the I12 beamline, or to discuss potential applications, please contact Principal Beamline Scientist Dr Michael Drakopoulos: michael.drakopoulos@diamond.ac.uk