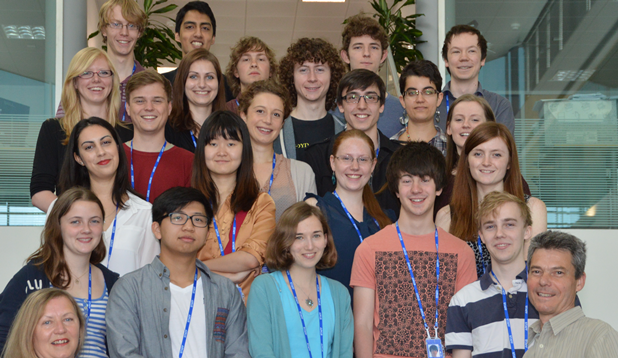 The Diamond Student Summer Placement scheme allows undergraduate students studying for a degree in Science, Engineering, Computing or Mathematics to gain experience working within a scientific environment at Diamond. These 8-12 week paid placements provide students with an opportunity to work on a research or development project in biological science, scientific data analysis, or physical science, ranging from developing a Diamond data smartphone App, to studying the structural characterisation of epigenetic regulators.

The zenith for our students is the poster presentation given at the end of their placement. In front of massed ranks of Diamond employees and visiting users, each of the 26 students in the 2014 cohort outlines their successes, failures, and conclusions from their time here. Contributions from the floor raise discussions on future research, with voices of encouragement, appreciation, and advice for the occasionally nervous yet nonetheless impressive individuals.

Alongside their placement projects, the students have the chance to enter the Science Communicators Award, which was established to recognise and support up-and-coming talent in science communication. Prizes are awarded for the best science writing, project documentation, and creative communication, and each entrant has the opportunity to contribute to Diamond’s future PR work.

Where are you from, and what do you study?
I grew up with my parents and two older brothers in north Gloucestershire, about ten miles from Cheltenham. It was pretty rural – farm at the end of the road kind of thing. I’m now on the last year of a Physics MSci at Bath University.

Who were your main influences for getting into science?
My brothers were early role-models – they’re both quite a bit older than me, and did well in science at school so I got some good free tutoring! But it was my GCSE Physics teacher Mr Swordy who really inspired me with Physics. He was just brilliant, and gave me a taste that there was so much more beyond GCSE.

And Rosalind Franklin of course. She was amazingly dedicated and achieved so much despite dealing with the institutional sexism of the time, and even continuing to work through early stages of her cancer. She’s shown me the importance of persistence even if you don’t see the immediate payoff.

How did you find out about summer placements, and what made you want to apply?
One of our uni professors emailed it around, and as soon as I saw it I thought “Yes, synchrotron! That’d be a pretty awesome placement!” There seem to be few placements in research-based institutions, so I knew I couldn’t pass up the opportunity. I’d been to CERN at the end of my A-levels so I was definitely interested in accelerator physics, but coming here has shown me what a big difference there is! 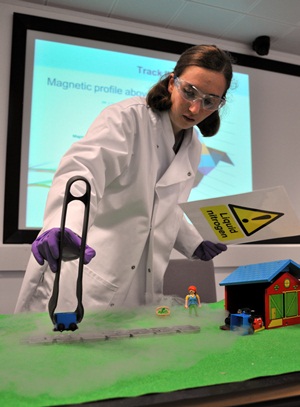 What’s it been like working with Claire and the team on the beamline?
She’s lovely! She really has been so helpful and accommodating. Particularly as I’m a physicist, and the synthesis work in my project has been more chemistry than I’ve been used to, she’s really helped me there. But everyone on the beamline has been really welcoming and I’ve felt able to approach any of them with questions. The visiting users have also been happy to look in and give advice, so the support all round has been amazing.

How have you been recording your project?
I’ve been blogging at ‘diamondros’ with photos and writing up my day-to-day experiences to track the project development. People don’t really see what scientists do on a daily basis so I wanted to get across the mix of things that go on here – sometimes it’s report writing, sometimes it’s playing with levitating superconducting trains, plus everything in between.

What’s been your highlight of working at Diamond?
Without doubt it was the public open day. The whole point of the project was to get the train to hover over the track for the public to give a practical demonstration of the behaviour of superconducting materials. And by the end of the day we were able to get a little person in a little truck floating around a little track, and it was just great to see the audience enjoying it as much as me!

And your lowlight?
The two weeks when the train just wouldn’t work. There were liquid nitrogen leaks, so I plugged them. There were issues with the experimental process, so I adapted the variables. But it just kept sinking and it seemed like I’d never get it to work. But I persisted, and in the end it turned out to be the shape and weight of the train, which had been one of the initial components of the project. So I bit the bullet, went for a more basic model, and thankfully it ran.

How has your time here made you think about your future career?
Before coming here I was more hesitant about going into a lab. When learning lab skills at undergrad level you’re often doing experiments where you already know what the results should be when it’s performed correctly. But here I’ve been setting experiments without knowing for sure what will happen, even when I do the experiment right! As a result, it’s certainly opened lab work up as an opportunity I’d like to explore a bit more.

What do you know now that you wish you had known before starting your placement?
Basically that it’s OK to use three days on something that doesn’t work. Although it helps if you know that in three weeks you’ll get it done! Steel your mind, and accept the failures along the way...

Ros’s blog, which has more writing and photos of levitating trains at Diamond, is at www.diamondros.blogspot.com