Enabling technology: The groups keeping Diamond ahead of the game 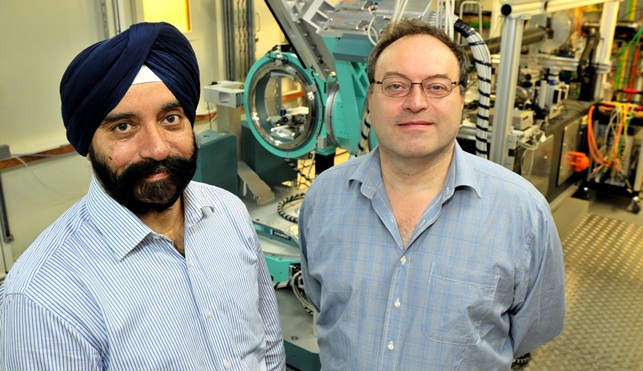 In 2004, two years prior to the first observation of synchrotron light in the newly built storage ring, two integral parts of the Diamond puzzle were put in place. As the building was pieced together, it was the measured work behind the scenes that gave foundation to our beamline technologies, and allowed the UK to stride confidently into the world of third-generation lightsources.

Whilst creating and storing the beam would provide one of the central challenges, there also needed to be a steady focus on the final stages of the beam’s journey. To condition the source beam, and capture the consequences of its interaction with a given sample, it was crucial to understand and develop the right technology to harness this radiation as effectively as possible.

It was the establishment of two key groups at Diamond, tasked with developing these enabling technologies, that first made the exploitation of the beam possible, and both have since played a leading role in the expansion of synchrotron radiation applications on a global scale.

The Optics & Metrology Group (O&MG) provide expert support to Diamond beamlines in the design, procurement, acceptance testing, and optimisation of all beamline optics. To extend Diamond’s capabilities and continue to push our performance levels even higher, the group engages actively in research and development for novel X-ray optics and specialised optical systems.

The Optics & Metrology Group led by Dr Kawal Sawhney is composed of a team of 15 full-time optics and metrology scientists and technicians, including two PDRAs. Kawal has over 25 years of experience in the field of X-ray optics and was the first optics specialist to arrive at Diamond in 2004. “We work closely with internal and commercial partners to develop novel beamline designs and next generation optics, and to rigorously test their capabilities. The challenging specifications of our users and in-house beamline teams mean we continue to push the boundaries of optics technologies.”

Modelling beamline optics: The O&MG works closely with beamline teams to advance the optical design of their respective beamlines. The designs and challenges of each beamline are different and careful detailed simulations of optics schemes are performed to arrive at a tailor-made optical layout. As well as using available optics simulation software, the group develops in-house simulation tools. In the last few years, the group has made significant contributions to an international collaboration developing software for wave modelling of X-ray beamlines.

Metrology at Diamond: All beamline optics are acceptance-tested in the metrology cleanroom before being installed. Because of increasingly tight optical specifications and the growing demand for complicated surface profiles, almost one in five procured optics are rejected and returned to manufacturers for replacement or refurbishment. Without the in-house quality control of procured optics, inadequate equipment could be installed, and performance degradation over time could go undiagnosed. The group’s metrology capabilities were further enhanced with the establishment of a new Precision Metrology Lab, which provides temperature, humidity, and vibrational stability for testing micro and nano-positioning beamline systems.

High-accuracy characterisation of real X-ray optics is a particular area of interest both for quality control and novel device development, and the ultimate test of an X-ray optic is how it performs on the beamline. Therefore it is crucial to characterise the optics at the specific wavelength for which it will be used. In situ wavefront sensing performed at the optics’ operating wavelength (‘at-wavelength’ metrology) can be used not only to optimise the performance of X-ray optics, but also to correct and minimise the collective distortions of upstream beamline optics.

Developing Novel Optics: Because Diamond uses more bimorph mirrors than any other synchrotron, the group has spent significant time and effort to understand their performance. The demand for nano-focusing optics and mirrors with sub-nm figure errors has given rise to a need for X-ray optics capable of producing user-specified sizes that range from sub-micron to 100 μm. As a result, a novel super-polished adaptive bimorph mirror has been developed by the O&MG. In situ characterisation with synchrotron radiation on Diamond’s Test beamline (B16) and optimisation using at-wavelength metrology have validated the performance of this prototype optics. The results of this development will soon be applied to user experiments at the I24 MX micro-focus beamline, which is now replacing its present micro-focusing mirrors with super-polished ones.

The next generation of optical technology is being developed using expert micro-fabrication techniques on Diamond’s material namesake. X-ray optics made of diamond are almost completely transparent over a wide wavelength range, they possess high strength and thermal conductivity, and are subject to very low thermal expansion. The design and fabrication of nanocrystalline and polycrystalline diamond refractive lenses using a novel moulding technique has allowed the group to demonstrate sub-200nm focused beams, with large aperture (100 µm) and high peak transmission efficiencies (57%). Technological challenges in developing these lenses are being progressively overcome and it is expected that these diamond nano-focusing lenses will be used on several beamlines in near future.

B16 Test beamline: A flexible and versatile beamline operating since 2008 and has been extremely successful to help develop enabling optics and detector technologies by providing unique and timely test facilities to both in-house and external users. The emphasis on in-house X-ray optics and detector development is complemented by a strong portfolio of external user research. Recently, an ongoing collaboration between Cardiff University and Diamond broke new ground in understanding the X-ray birefringence phenomenon. With its ability to accommodate novel experimental environments and bespoke beam requirements, the users on B16 were able to demonstrate the viability of X-ray Birefringence Imaging, which examines the spatial distribution and orientation of molecules within a given material.

The Detector Group gives support and assistance in the provision of specialised X-ray detectors at Diamond. This ranges from purchasing off-the-shelf detectors to developing completely new detector systems. Along with the ongoing detector support work across the beamlines, the group engages with a number of high-profile international collaborations to develop new technologies in response to the ever-evolving applications within Diamond and around the world.

The day to day work of the Detector Group is supported by a suite of specialised labs based within the synchrotron building. These consist of an X-ray set, a detector lab, and an electronics workshop with a probe station under clean area conditions.

The Detector Group is led by Nicola Tartoni, who has over 20 years of experience in the field of radiation detection and scientific instrumentation. The group has 11 full-time staff with expertise spanning from electronic engineering to physics, and an ongoing apprenticeship programme providing early-career training. Like Kawal, Nicola has been at Diamond since 2004, and built the Detector Group up steadily since he took leadership in 2007. “We are there at the conception of each new beamline and advise on those technologies best suited to the beamline’s requirements. Each beamline presents a unique challenge, and their evolving needs are what keep us moving forward”.

The Medipix collaboration: A major part of our work is the collaboration with Medipix, which Diamond joined in 2007. This international collaboration with 21 institutions worldwide, and works towards developing new Application-Specific Integrated Circuit (ASIC) chips to improve beamline imaging capabilities. Diamond’s involvement has led to the group having an extremely sound knowledge of all the technologies that make up a photon counting detector. The impact of this work is now emerging, with the systems deployed across Diamond’s beamlines and useful to a large number of different applications.

The latest ASIC from the Medipix family is the Medipix3, a CMOS pixel detector read-out chip designed to be connected to a segmented semiconductor sensor. It acts as a camera taking images based on the number of particles which hit the pixels when the electronic shutter is open. Medipix3 is used in Diamond’s Excalibur and Merlin detector systems, and Lancelot beam positioning monitor.

The next generation chip being developed by the Medipix collaboration is the Timepix3, a read-out ASIC with the same pitch and format of Medipix3 (55 µm pitch, 256x256 pixels) but with very different functionalities. Timepix3 enables the time of arrival measurement of photons with respect to a reference signal. In addition, the energy of a photon can be measured with the time-over-threshold method.

Excalibur: A large area photon counting direct detection detector with 55 µm pixel size, commissioned on the Imaging and Coherence beamline (I13) in 2013. This detector can be used across a number of beamlines, and the main features are: small pixel size, guaranteed by the Medipix3 ASIC; large area, obtained by tiling 48 Medipix3 ASICs for a total of over 3 million pixels; over 2,000 pixels continuous in one direction, given by record length silicon sensors; and 1,000 frames per second frame rate, obtained with a fully parallel read-out architecture.

Merlin: A high performance detector that requires no additional cooling system and, being around the size of a mobile phone, is easily installed into small spaces. Merlin is capable of taking 1,200 frames per second in burst mode and 100 frames per second in continuous mode with no dead time between frames. Merlin is the standard development platform of the Detector Group for Medipix3 assemblies, and is now commercialised by the STFC-Diamond spin-out company Quantum Detectors.

Lancelot: A beam position monitor built in collaboration with the University of Manchester’s School of Electrical and Electronic Engineering. The device helps to monitor the alignment of the micrometer-sized X-ray beams as they travel, first through the instrumentation that refines them and then on to the samples being studied. In essence the device is a pinhole X-ray camera that makes images of the beam by recording the scattered radiation from thin, weakly scattering foils. A unique feature of the instrument is that it provides enlarged images with very detailed information of the impinging X-ray beam including µm-sized beams.

Xspress 2 and Xspress 3: Digital pulse processors for spectroscopy grade detectors such as germanium multi-element detectors or silicon drift detectors. Xspress 2 was developed in collaboration with STFC based on the Xspress system originally developed for SRS (Daresbury). It has been further developed in collaboration with Quantum Detectors to become the commercial product Xspress 3. These systems maximise the throughput and energy resolution of such detectors and remove the bottleneck at the readout stage. This detector can open up the beamline to much faster data collection, as its dynamic range can reduce the number of scans required and save time with attenuation selection.

From the early years of Diamond’s construction, the two groups that drive our enabling technologies have grown up alongside the phased developments, expanding their knowledge base on the way and answering those difficult questions posed by users. Today, each group continues to play a major role in the development of novel design projects, and tests the boundaries of our technology through international collaborations with academic and commercial partners.

Together with the day-to-day technical support given to Diamond’s 24 operational beamlines, both the Optics and Metrology Group and Detector Group have made major technological breakthroughs over the years. It’s this constant innovation that has allowed us to remain at the forefront of synchrotron research, and will continue to push Diamond onward as we move beyond Phase III.